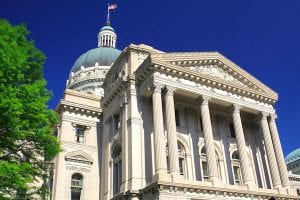 INDIANAPOLIS, Ind. (ADAMS) – State lawmakers could be considering a veto override after Governor Holcomb vetoed a bill that would curb his emergency powers.

The measure would have allowed the General Assembly to call itself into an emergency session when the governor declares a statewide emergency.

On Friday, Governor Holcomb vetoed the bill. Both the Indiana Senate and House are now discussing a possible veto override vote.