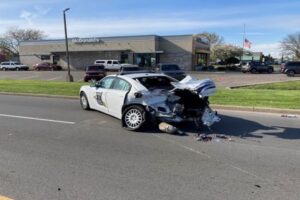 HAMILTON CO., Ind. (ADAMS) – Indiana State Polie say that a Texas man will be charged when he is released from the hospital after stealing and crashing a State Police vehicle.

On Saturday, April 17th 2021, ISP Region 5 dispatchers in Indianapolis were monitoring cameras and observed a black 1999 Ford F-150 parked behind an abandoned vehicle on I-69 near the 206 mile marker. They watched as a white male began looking into the car. Trooper Jonathan Troyer was dispatched to check on the suspicious activity. When Troyer arrived, he made contact with a man later identified as Phillip Lane Hurley Jr. Hurley immediately ran away from the car. Trooper Troyer gave chase and deployed his taser striking Hurley. As Trooper Troyer attempted to place Hurley in handcuffs, he began to actively resist arrest by assaulting Trooper Troyer.

Officers from the Fishers Police Department and the Madison County Sheriff’s Department joined the pursuit as it continued northbound on I-69 at speeds of 140 miles per hour.

Hurley finally exited I-69 at the 226 mile marker and travelled south on State Road 109 where ISP dispatchers could no longer view his vehicle on the interstate cameras. Dispatchers were able to monitor his location by using the GPS installed in the stolen police car. They continued to advise pursuing troopers of Hurley’s location until he crashed in the intersection of 53rd St. and Scatterfield Road inside the city limits of Anderson. Hurley struck a southbound SUV before spinning out of control and striking a semi-tractor trailer sitting stationary at the traffic light. Neither driver of the other vehicles involved were injured during the crash.

After the crash, Hurley escaped the wrecked car and once again fled on foot running through the McDonalds parking lot. He unsuccessfully attempted to steal two vehicles from the parking lot, both of which were occupied at the time. He continued running until he was apprehended by members of the Anderson Police Department.

Hurley was transported to St. Vincent Hospital in Anderson to be evaluated for minor injuries sustained in the crash. He remains there under police custody until released by hospital staff.

Investigators learned the vehicle Hurley was originally driving had been stolen near Effingham Illinois. They also learned Hurley had an active arrest warrant, with full extradition, from the Harris County Sheriff’s Department in Houston Texas. The warrant is for aggravated assault with a deadly weapon.

Hurley will formally be arrested and charged once he is released from the hospital. Charing information will be released at that time.