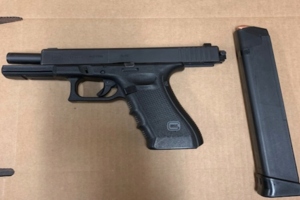 Friday morning at approximately 5:00 a.m., Trooper Beers was patrolling along the Indiana Toll Road when he observed a blue 2013 BMW traveling westbound on I-90 at a high rate of speed. A check of the vehicle’s speed via radar showed the vehicle traveling at 110 mph. The posted speed limit along I-90 at the 2.5 mile-marker is 55 mph. A traffic stop was initiated near the west point toll plaza. During the traffic stop, a search was conducted as a result of information gained by the trooper. During the search, a loaded full-auto Glock handgun was located hidden under the hood of the vehicle. Processed marijuana, THC edibles and other suspected controlled substances were located both inside the vehicle and in the possession of the occupants. The driver and passenger were taken into custody and later transported to the Lake County Jail without incident.

Later in the morning at 11:30 a.m., Troopers with the Lowell ACP (All Crimes Policing) Team stopped a vehicle on I-94 at the 29 mile-marker for a traffic violation. During that traffic stop, troopers conducted a search as a result of their observations and subsequent investigation. During the search, a Sig Sauer AR-15 rifle, a Glock 32 and a Dan Wesson 1912 handgun were seized. The driver was subsequently arrested without incident and later transported to the Porter County Jail. Assisting at the scene was the Valparaiso Police Department.